The COVID-19 pandemic has intensified existing trends and digital acceleration, enlarging the gap between those at the top and bottom of the power spectrum of economic profit. Will your digital strategy keep you ahead of the accelerated pace of disruption?

The rift between industries and business models that we understood logically before the COVID-19 crisis has now become collateral clefts, separating the old paradigm from the new. Just as a nuclear shock wave produces a sudden release of repressed force, the economic shock set off by COVID has brought about the digital acceleration and boosted trends that were already set in motion. The result is a dramatic broadening of the gap between those at the top and the bottom of the power spectrum of economic profit —the winners and losers in the global growth performance race.

However, along with the accelerated pace of disruption comes a unique hope to unlock big critical moves. Our research found that organizations that pursued significant cardinal activities persistently, through every wave of the economic cycle, increased their chances of outperforming their competitors. Much of the organizational passivity that usually stands in the way of releasing these big moves is now gone, as the pandemic has rendered archaic the budgets and personal targets that make such moves so challenging to achieve.

The Digital Acceleration Gap is Closing

To understand how the COVID-19 pandemic is shifting profit centers and digital acceleration, we have used changes in market capitalization to calculate market-led long-term economic profit for the enterprises globally. While the school of thought of whether share prices are a good reflection of our new reality is open to discussion, we aren’t interested in the overall market-capitalization ranges as in the patterns emerging among organizations and industries. And those patterns are considerable, consistent across measurement periods and with the organizations we reached out to, and very different from what we saw during the 2008 global financial crisis.

Our analysis reveals that the chasm in economic profit between the top corporate performers and everyone else has broadened dramatically. In effect, the crisis has accelerated a tendency that was already present (Chart 1). Between December 2018 and April 2021, the top quintile of companies grew its total market-implied annual economic profit by $412 billion, while companies in the bottom quintile lost a staggering $447 billion. And while the specific numbers can oscillate from day to day, the more significant trend is unmistakable: a gap is widening, and it’s rapidly growing. That’s a pattern that has been obvious since 2011. Now, the COVID-19 pandemic is accelerating this pattern.

What’s driving this widening gap? So far, we don’t see a significant overhauling of industries and companies along the power spectrum in the global financial crisis in 2008, when companies in the electronics, energy, and financial-services sectors crashed from growth peaks. Instead, industries and organizations that started at the top of the spectrum before this pandemic prove to be strong, while those at the bottom end of the spectrum are faced with the most significant losses.

This increased diffusion can be witnessed both across and within industries. Industry sectors at the top of the spectrum before the crisis, such as pharmaceuticals and semiconductors, seem to be growing ahead of the less profitable sectors that started at the bottom, such as banks and utilities (Chart 2). The six most profitable industries have added $270 billion a year to their expected economic-profit collections for a quick perspective. In contrast, at the other end of the spectrum, six have lost $380 billion.

The diffusion of performance within industries is widening too. In fact, in 7 of the 12 sectors we researched, companies in the top quintiles of their industries before the pandemic are outperforming their competitors in the bottom quintiles to an even greater level than they had before.

It would be easy to infer that the widening gap between those at the top and the bottom of the digital acceleration spectrum is simply because of the nature of the COVID pandemic and its demanding shifts. While that has indeed played a role, it’s the partial story. What we are seeing is a significant acceleration of tendencies that existed before the pandemic. For example, online delivery’s number increased by the same volume in eight weeks as it had over the entire previous ten years. Telemedicine jumped a tenfold growth in subscribers in just fifteen days.

Similar spurring patterns can be seen in online education, DTC dropshipping, and remote work, to name but a few areas. All these aspects were apparent before the pandemic and have been intensified by it.

The industry analysis supports this view. To a notable degree, industries experiencing declining economic earnings before the pandemic have suffered even more significant declines because of it. In contrast, those that were improving their profit have seen outsize gains because of digital acceleration.

Companies with courageous, future-proof business models built on digital positioned to ride these trends have scaled further away from their industry competitors. In contrast, those with conventional business models have, for the most part, fallen short. For example, media companies with on-demand streaming services have outperformed their traditional satellite-based live feed peers, and easy meal-kit, cloud kitchen providers, have greatly profited from an accelerated trend toward easy cooking. This pattern can be found in many other industries. “We’ve seen two years’ worth of digital transformation in two months.”  Satya Nadella said, during last year’s quarterly earnings town hall. That continues to be the reality. 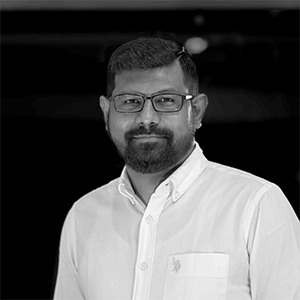 Joseph Abraham is the Founder of Alpha Cube. Prior to this, Joseph served as the CEO and Principal Consultant for Growthfluence, a global SaaS research and advisory company. He has also served on the leadership of Royal Bank of Scotland and Great Lakes Institute of Management